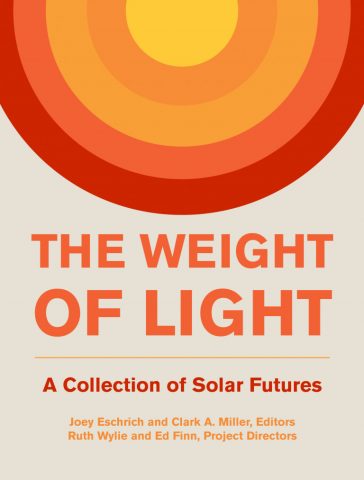 In the introduction, editor Joey Eschrich says that the book was “inspired by a simple question: what would a world powered entirely by solar energy look like?” With that question in mind, the Center hosted a narrative hackaton in April 2018, and brought together authors, artists and various experts to “create technically grounded, inspiring visions of a future shaped by a transition to clean, plentiful solar energy.”

After the event, each team continued to work on their respective projects, ultimately resulting in the anthology, which features stories from a variety of science fiction authors — Brenda Cooper, Andrew Dana Hudson, Cat Rambo, and Corey S. Pressman. The four stories imagine how everything from large cities to small, rural communities might deal with solar power in the future, and are accompanied by artwork and a pair of essays that drills down into the design of the world that the authors depicted.